Isotypes are a form of communication developed by Otto Neurath (1882-1945) during the nineteen-thirties. Neurath was a political economist who studied mathematics and political science. He began his career as an advisor for the Austrian government and later became Secretary General for the Austrian Housing and Garden Plot Association before founding the museum for housing and planning, Siedlungsmuseum, in 1923, which became the Gesellschaft und Wirtschaft (Society & Economic Museum) a year later. 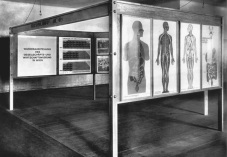 The Gesellschaft und Wirtschaft museum, funded by the social democratic government of which Neurath was a member, offered an environment though which Neurath could develop a new way of sharing information about economics and politics. Neurath wanted to communicate statistical information to a mass audience in order to educate and improve society. In order to share mathematical data in a way that would be both engaging and clear for the public, Neurath and his team designed a collection of one hundred statistical charts printed on loose leaves intended as plates for exhibition as a ‘portable museum’. These charts used a specifically organised graphical language, the Vienna Method of Pictorial Statistics, later to become ‘Isotype’ (International System of TYpographic Picture Education) around 1935.

graphically formulated by the artist Gerd Arntz. Through the use of a standardized visual language social data could be shared in a way that removed barriers to information with their belief that ‘words separate pictures unite’. International Picture Language of 1936 detailed the manifesto of the organization and its language and formulated a framework for its use and development.

Neurath’s interest in mass communication was influenced by encyclopeadias of the seventeenth-century, particularly Cormenius’ 1658 Orbis Pictus which was one of the first picture books for children. In addition Charles Ogden’s ‘Basic English’ (British American Scientific International Commercial), a stripped down version of English language with a small vocabulary (850 words), seemed to forge a path toward a clearer and more universal form of communication. This was something of particular use for statistical and economic content that often remained complicated and dense to the layman. Influences of his more specific

Underpinning this work was Neurath’s belief in statistical and objective values. Neurath was a central member of the Vienna circle, a group closely connected to the University of Vienna. Their manifesto ‘Scientific Conception of the World’ from 1929 aimed to combat metaphysical approaches to thought through the tenets of empiricism and positivism, promoting an approach based purely on that which can be gained through experiential evidence and logical analysis, and quotes Ludwig Wittgenstein, Albert Einstein and Bertrand Russell as defining influences. This approach was encapsulated in the parameters given to the Isotype language whereby clearly defined values were used, such as numerical quantity, over more fluid notions such as size. This also included the avoidance of ideas considered to be intangible such as justice, truth, and progress.

For example this chart, entitled ‘Numbers of motor vehicles in the world’ (USA and rest of the world). Each automobile represents 2.5 million vehicles and further quantities are expressed through repetition rather than larger symbolic representation. Context is also given to the statistics through the industrial city-scape in the background.

Neurath was considered to be on the left wing branch of the Vienna Circle and many of his projects were linked to a socialist agenda. Isotypes were a major influence on Soviet pictorial statistics, with the organization publishing work for the first economic plan of 1929 and helping set up the Izostat Institute.

After the start of the Second World War, Otto and Marie moved to Britain and set up the Isotype Institute in 1941. Their work was used by the Ministry of Information, often in conjunction with the filmmaker Paul Rotha, to communicate information about the war effort and later to promote the British Welfare state in 1940s.

Neurath died in 1945, however under Marie’s direction, the approach was adapted to help develop education and social welfare in Nigeria, Sierra Leone, and Ghana throughout the 1950s. In 1971 Marie gave the working material to Reading University’s department of Typography & Graphic Communication, which can now be accessed through the Otto and Marie Neurath Isotype Collection.

Isotypes, although well known, have mostly been celebrated in the fields of graphic design and art, and not within the world of mathematics and statistics making them a unique and interesting inclusion in the new Mathematics gallery set to open at the end of the year.